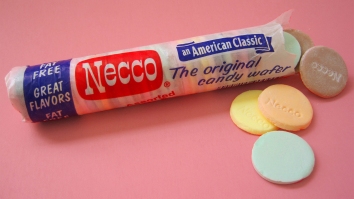 I’m not sure I know any NECCO enthusiasts.  To me they taste kind of like a benign version of TUMS.  Just as chalky, but not as…well…nasty.

But at the news that NECCO was going out of business, people started buying the rolls of “great flavors!” candy like they were going out of style.

Each little quarter-sized wafer became a bitcoin all of a sudden.

And then the bidding war started.  Candy moguls (there is such a thing) lined up to bid on the waffling wafers, with the Metropolous family winning out in the end.

You probably haven’t heard of the Metropolous family, but if you’re at all familiar with the incredible come-backs of Pabst Blue Ribbon (once the working class coozy filler and now a “trendy American lager”), Utz, and Twinkie, you’re familiar with the fruits of the family labor.

It’s not pretty, mind you.

If the Metropolous family were farmers, they’d be known as judicious pruners.  Their trees would we short but full of harvest.  They basically take whatever a company is best at and works only on that, stripping away everything that is no longer producing.

It’s a ruthless practice in many ways, and I don’t mean to romanticize it at all.  When making a comparison between the spiritual life and the actual lives that are behind a business, we run the risk of forgetting the spirit behind the stocks.

But we can learn something here, if we have ears to hear and eyes to see.

Because NECCO was about to go belly-up, wholesale.  A total loss.

And I talk to people all the time who are quitting the faith wholesale all the time.  In their eyes, though the faith may be the longest single anchor in their lives, it has just become untenable anymore.  They feel they have to cut anchor altogether.

But what if, instead of doing that, they “sold it” in some form or fashion?

Not for profit, but for pruning.

I mean, c’mon. Let’s be real here.  If your religion asks you to be a jerk, it’s not worth following.  That can’t be right…prune it away.

Sometimes religion is just a cover to reinforce people’s xenophobia.  And not just the Christian religion, but any religion.  That, too, needs to be exposed and pruned away for the dead-end life that it is.

And for those of you ready to abandon the faith because some Colorado bakers are idiots: don’t.  Stay with it.  Don’t sell it wholesale, but understand that some people just can’t be made to love, no matter how much Jesus spoke about it, modeled it, commanded it even.

If Jesus were a baker, I bet he’d bake for anyone who showed up.  And every cake would 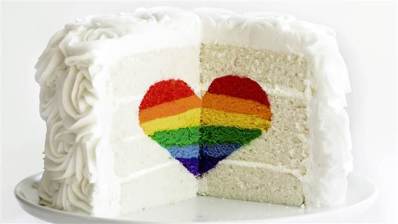 have a rainbow, regardless of the sexual orientation of the customer.  Because rainbows are pretty.

Allow some beliefs to be pruned away by the knife of life, which, when lived outside a bubble, will surely present you with some situations that will expose some faith ideas as inadequate for the demands of living in a world as diverse as this one.

But, and here’s the thing, I think a wholesale abandonment of the faith will prove to be inadequate, too.

Faith does not make sense of life; it helps life make some sense.  And, when it’s at its best, it keeps us from being jerks, it doesn’t encourage us to be one.

So, don’t sell off the faith wholesale, friend. Don’t lose the great past of your faith without fighting for it a bit.  You can lose parts of the faith of your past and still retain the best.

Focus on what is working best, and foster that spiritual muscle above all else.

Allow some good pruning to happen…and bake some cakes.