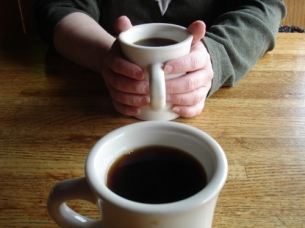 Today I sat down for a coffee at the midway stop between the office and the hospital.  It’s become my midway stop mostly because I can take a minute to read there without being too disrupted.

I collect coffee shops like some people collect cars: the one they choose depends on their mood.

If I’m open to being interrupted, I’ll go to the ones near the office.  Rarely do I not see someone I know there, and the inevitable conversation becomes an important moment.

And then there’s this one.  It’s very public, and therefore, very private.  There I can get outside to get inside: inside my thoughts, inside my heart, inside the places where I store all the crap from work and unpack it.  Sort it.  Discard some. Cherish some.

Everyone should have such a place, by the way.

But here I was, sitting and having a coffee and reading what needs to be read to keep up on this work, and across from me two men, probably just over middle-age, were chatting about the Torah, with a large study edition of it open in front of them.  They were lay scholars, obviously, and their conversation was winding through the intricacies of orthodox Judaism and evolution.  Not Orthodox Judaism, mind you…not the strand of Judaism that is labeled as “Orthodox”…but rather orthodox in the sense of “what is in the norm.”

I found them being surprisingly frank with each other, willing to wrap their faith around the scholarship and science, embracing evolution.  It was apparently the topic at hand.  I was heartened.

I had my earbuds in, but I wasn’t playing any music, because I was engrossed in their conversation.

And then a third man walks up and stands there with his coffee in one hand and an excuse in the other.

His coffee?  Nondescript.  His excuse? I’m all too familiar with it…

“I couldn’t help but overhear you,” he said, “and I’d like to offer you my thoughts on your conversation.  See, I believe in Jesus Christ.  And the questions you’re discussing are all found in the new revelation called the New Testament.  We are all imperfect, and our understanding is imperfect, but God’s understanding is perfect, and…”

On and on.  I remember it well because it was kind of like witnessing a theological and philosophical car wreck in real time as he interjected himself into their conversation that, until that point, had been open and full of questions and honest responses.  The whole scene is seared into my brain.

I looked over at the seated gentlemen content with their Torah.  They were obliging but expressionless.  I couldn’t tell if they’d heard it all before or not.

The man with an excuse went on with something like:

“I just had to come over here because God invited me into the conversation.  I felt like I had to tell you these things.  You can put your trust in him.”

At this point one of the gentlemen said, “I do put my trust in God.”  Then the man with the coffee and the excuse to interrupt the conversation said, “Jesus is God.”

And then he walked away.

And the men sat there almost as if they had been assaulted.  Saying nothing. Just looking down at their open Torah, sipping their coffee.

And I thought to myself that, in that conversation, the one who needed to be converted was the one doing the converting.  He had interrupted an open and honest journey with his stock answers and intruding presence.

I understand that he had something to say.

What if listening is more important than saying in these days?

What if the real place of conversion is the place where the answers are so rigid they’re brittle?  And rough?  And used to assault more than affirm?

What if the saved need saving just as much as everyone else?

After all, the Jesus the scriptures point to started with converting the believers.  And believe me when I say: we need to take down that “Mission Accomplished” banner on that front…

I’m not sure how the silence at the table broke because I felt the pressure of the clock and had to move on to the next thing in the day.  I don’t know if either of those men’s hearts were moved.  It didn’t look like it.  They looked more annoyed than anything.  And I have no idea if the man with his coffee and excuse to interrupt their day felt anything from the exchange, either.

But one thing I do know: my heart was changed, just a bit.

I resolved not to replay that scene.  Ever.

I mean, not that I was in danger of doing it.  But sometimes I need to be reminded.

2 thoughts on “On Being Converted”