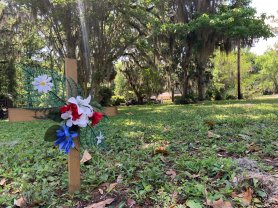 That question, “What have you done?” cuts both ways in America. It always has, if we’re honest.

If you think for one damn minute we live in a post-racial society in the (dis)United States, explain to me why we still see Confederate flags at Reopen Michigan rallies.

Explain to me how a man in a KKK hood in California shops for produce in compliance to the face mask ordinance.

Explain to me how a man can go jogging in a neighborhood of moss-hung trees and modest ranch houses and, just because of the color of his skin, is stopped and accosted by white residents armed with weapons.

No, not just accosted…hunted.  They saw him running and, like seeing an animal they wanted to get, grabbed their guns, hopped in their pick-up, and gave chase.

And if you think this is an isolated incident, need I say the name Trayvon Martin?

We may have outlawed lynching, but it took two months to get an arrest in Ahmaud Arbery’s murder, with the prosecutor originally advising that no charges be brought because the murderers acted “in self defense.”

Apparently being black in a predominantly white neighborhood is threatening.

Actually, the above statement is exactly correct in my personal experience.

Not too long ago someone visiting my house looked out our window and, seeing a person of color in the cul-de-sac casually said, “Someone’s in the wrong neighborhood…”

The person is our neighbor. I mean, literally they are our neighbor, but this person who shows up weekly in a house of worship should also understand that word in a different way.  Did not Jesus say “love your neighbor” and, when pressed on the issue, gave a wide-sweeping definition of that word that undoubtedly included those who don’t look like you?

Let’s face it: most Christians have deified their prejudices, their political policies, and their bankrupt morality, not God.

The question, “What have you done?” weighs on me though.  Because when that person made that casual remark in my home I just said, as casually, “Oh, that’s Mr. X. They live in that house,” pointing down the road.

Combating racism starts at the level of the heart, the head, and the mouth.  So many white people gather at Arbery’s grave not to cheer a miscarriage of justice, nor to protest it, but rather just to go home shaking their heads, preferring guilt to responsibility.

Be responsible.  We are responsible, in all the ways that word can be used, for this mess.

Justice is on trial, Beloved.

And for Christians, this issue needs to be personal.  Not only because our past is complicit in the problem, but even more so because we claim (emphasis on that word) to worship a God who fell victim to a miscarriage of justice.

The story of Jesus is one of a loving God going walking in the wrong neighborhood, a neighborhood that preferred violence to peace, preferred division over unity, preferred vengeance over service.

So, the question I’m asking myself, and I’m asking you: what have you done?!

1 thought on “Justice is on Trial”