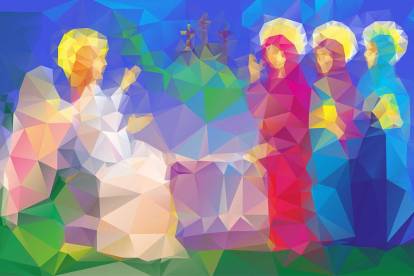 Every Easter I have this ominous feeling that my colleagues in churches who don’t ordain women are skipping part of the resurrection story.

They have to be.  They must be. There’s no way that they can be reading the Gospel account and still not see the need to ordain women into the pastoral office.

They are the first ones entrusted with it.

They are the first preachers to those scared disciples in that upper room.

So how can they defend not ordaining women, especially on Easter, when on Easter they hear the women are entrusted with the sacred news first?

Is it because of Paul’s letters, where he tells women to sit down in church (and he only writes that once, by the way)? Are we to believe that Paul has more authority than the risen Jesus?

If we hold Paul’s letters as equal to the example of Jesus in the scripture, we need to honestly re-think our identity as “Christians,” and perhaps just fess up that we’re “Paulians.”

I mean, except for the rampant misogyny of the ancient world, it’s a wonder that women weren’t the first and only pastors of the church!  They were the only ones who stuck around through life, death, and resurrection.

And that rampant ancient misogyny still shows itself today, of course.

And you know it does.

Because there are tons of churches who will read the Easter text and not get a whiff of irony in it all as their all-male clergy dominate the roster.  Oh, sure, they’ll lift up the role women play in the world. As “helpers.”  As “good and faithful.” And at least good enough to teach Sunday school.

To the little children.  Not the older children. Or adults.  Women can’t have authority over men.

And just when do men become men, by the way?  I’m a man. But I can’t really tell you when it happened…

And trust me, teaching Sunday school? That is no small thing.

But if that’s the extent of what women are empowered to do, it’s also not large enough.  Not large enough when the Gospel witness clearly shows, in all four Gospels, that the women are the first to know (and in most of the Gospels to tell) the resurrection good news to the scared and hiding men.

Perhaps this Easter some denominations will be raised from their ban on women clergy into the resurrection life of full participation.

You never know.  Crazier things have happened…like people being raised from the dead.