Let’s start with some political statements: 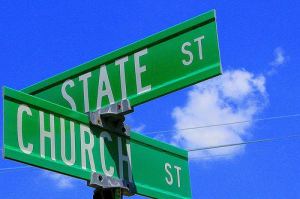 Yes; that is a political statement.  You might think it’s pretty innocuous.  Perhaps you even think it’s a bit annoying (sometimes I find how this seems to be a catch-all answer for some annoying).  But, actually, for the ancient people in Palestine, this statement was scandalous.  Because they only had one Lord: Caesar.  And if you went around saying Jesus stands in the place of Caesar for you and your family…well…keep your politics to yourself.

Yes; a political statement.  Want to hanker a guess as to who was the Prince of Peace in ancient Palestine?  If you chose Bill Murray, you were off by a few thousand years.  No, it was Caesar.  He was hailed as the one who kept the empire out of war.  He was the harbinger of peaceful times.

That is, unless, you were some of the occupied people under him.  The Roman Empire kept peace through military might and subjugation; through intimidation and economic sanctions.  Is that really “peace”?  The absence of war does not mean the presence of peace…

In fact, the opening chapters of the first three Gospels are chock full of political language.  But no need to just stick to the New Testament.  The prophets were certainly not quiet about politics, both domestic and foreign.  The whole book of Exodus was leaving one political reality for another, tackling immigration head-on.  The whole book of Leviticus was about how the people would organize themselves in the new land.

See, we have people who get pretty angry when they hear “politics” preached from the pulpit.  In fact, a colleague of mine recently noted that pastors should preach the Gospel and then shut up.

But, well, nothing happens in a vacuum.

We aren’t people who are floating free in our own little religious world.  We must talk about politics from the pulpit.  The ancient texts compel it; the modern times call to us from the news programs and paper rags.  We are being pulled into it by the past and the present, and the preacher must put these two things together to comment on how God might be leading us into the future…

We should talk about how farm bills do or do not help feed the world.  We should talk about how, in Chicago, we are bankrupt and giving huge corporations billions in tax breaks while, just this last year, my housing tax went up, but my house value went down.  And if that’s the case for me, who lives in a pretty good neighborhood, what does that mean for my sisters and brothers who don’t?

Explain that to me, please.

See…your pastor has to talk about politics because you are enmeshed in political systems that have a spiritual dimension.  But we’ve been trained by the world to have a negative reaction to such talk because we see politics as divisive rather than unifying.

That being said, to pretend like the texts don’t say something about political issues is naive.  You follow the Prince of Peace, and yet you don’t think that God might have an opinion on war?  You say “Jesus is Lord” and yet your church is making most of it’s decisions based off of economics, putting money in the place of power?

Nothing happens in a vacuum.

Your church shouldn’t feel like a gathering of the Democratic Party.  That’s a church that would have a hard time saying “Jesus is Lord” and meaning it.  That’s a puppet platform.

Your church shouldn’t feel like a gathering of the Republican Party, either.  Or any part, for that matter.

So many do, though.

And I’ve been accused in my time of preaching politics…it’s a careful line the preacher has to walk, and hopefully it’s done with fear and trepidation.  Politics so easily turn partisan.

We can be careful how we speak, but we cannot not say anything.

12 thoughts on “Why You Get Mad When Your Pastor Mentions Politics, and Why She Has To…”