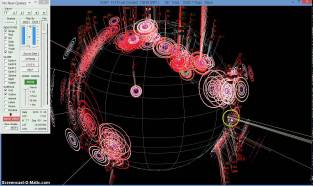 There is an exciting but difficult reality facing the mainline church: the seismic shift mainline (and other) congregations are feeling will be in full effect in the next twenty years (which the sainted Phyllis Tickle calls “The Great Emergence“).  Right now we’re just feeling the tremors, and even these small shifts are causing extreme anxiety!

Which means that the landscape will look radically different in the near future, and I’m not trying to be an alarmist, but we need to start considering what might need to be in place so that we can move with the shifts, and we need to do so from a multiplicity of angles: pastor, evangelism, congregational structure, ecclesial hierarchy…all of it.

Many conversations around this topic focus on the pastor, specifically how we’ll have to embrace bi-vocationality or even employ circuit pastors as congregations dwindle to the point that calling full-time clergy will no longer be an option.

That’s an important conversation.  I fully realize that my generation may be the last who can expect to make a full-time living in mainline churches with this odd way of being in the world that we have named “Call.”  In some ways, seminaries today are training the ecclesial equivalent of a cobbler: a noble but antiquated profession.  That is to say, while much of humanity still wear shoes every day, the work of a cobbler has changed significantly (as in, they’re largely out of work).  I have no doubt humanity will still seek spirituality and look to religion as some sort of compass (when Google fails them), but it will not be the same.  It just won’t.

I, however, want to look at this seismic shift from the place of the congregation, or more rightly, from congregations.  How might congregations be organized now, or re-organize themselves now, to prepare for this inevitability?

There are a couple fronts already being worked.  Congregational renewal, missional training efforts, alternative (at least to traditional forms) worship styles are popping up all the time it seems (beware the hipness!).  Like advertisements during daytime TV, they all claim to have the fix.

But I want to move the lens out even wider than the individual congregation.  Move the focus out to the neighborhood.  And then wider still, to maybe a section of the geographical landscape.  As a point of reference, consider my own locale: Raleigh-Durham-Chapel Hill here in North Carolina.  In this geographical area we have 13 ELCA congregations, some just a few miles apart.

Why do we maintain this kind of density?  The short answer has to do with tradition, identity, and an allegiance to an old model of church planting.  The longer answer has to do with a merger in 1988 that happened without much sacrifice in the pews, causing churches of the same denomination to end up literally across the street from one another.  That is a lack of strategic vision, a “let’s play nicely” way of operating on the surface that, in actuality, is Darwinian “survival of the fittest” at its worst.

I’m not saying the 1988 merger that formed the ELCA was bad or wrong; far from it.  Indeed we’re one of the only denominations to come together despite disagreements.  Most other denominations simply fracture (looking at you, other Lutherans).  I’m just saying that it was done without the strategic vision necessary to ensure sustainability of mission (it deferred instead to sustainability of form).

But as I gathered with some area clergy yesterday, all of us sitting around the table in a first meet-and-greet of sorts, I made the bold claim that in 20 years one of our parishes would no longer be around (at least one).  And it’s not like any of our congregations are in trouble on paper; they’re not.  We’re all growing (in different ways), and doing good ministry.  But for how long?  With the seismic shift happening, how long with this model last?

The truth: not long.

And then I said this: what if all of the churches around the table started to live like the Acts community in scripture?  That is, what if instead of thirteen individual congregations being present in this geographical area, known colloquially as “the research triangle,” what if we pooled our resources, pooled our laity, pooled our creativity and ideas and just created Triangle Lutheran Church?

And Triangle Lutheran Church has eight sites and fifteen pastors, each individual site retaining it’s particular tradition(s) and flavors, though joining together in missional efforts, corporate identity, and even in specialized ministry (as the context dictates).  Live in East Raleigh?  Head to our Good Shepherd site or St. Philip site, depending on which side of Falls you live on.  Out in Cary?  Check out our Our Savior’s campus.

Nothing earth-shattering here as far as ingenuity goes, right?  But polity-wise this would be a seismic shift for our mainline denomination.  Perhaps big enough to match the seismic-shift already occurring…

What does this accomplish?

First, it is my conviction that this will begin to stave off the accelerating number of congregational closures that are taking place in the mainline church.  Banding congregations, and pastors, together not after they’re dwindling/dead, but even when they’re growing helps morale, accountability, and stops the siloing effect that is plaguing our churches today.

Secondly, yoking pastors together (with a Head/Executive Pastors at the helm of the parish) will provide a structure for mentorship that is desperately needed in the profession today.

Thirdly, we don’t engage in the creativity-killing practices that typically infect multi-site congregations, specifically when it comes to proclamation.  Pastors will preach and preside at individual sites weekly, none of this “live-streaming,” consolidating, muting of messaging that creates cultic personalities for clergy.

Finally, with pooled resources (and that’s a non-negotiable…too many yoked congregations fail because they fail to truly and fully pool their resources), logical distribution practices, and pooled missional efforts, a parish like Triangle Lutheran Church could afford a localized missionary (or two!) for those radical experiments needed to work with the new evangelism landscape this shift will bring about.

None of the above is new.  In fact, I think it’s probably the oldest model of church out there.  But we need to get back to it.

Look, I do not think the Church is going to die (or, following the story we tell every Sunday, stay dead for long).  But I do think congregations and even whole denominations will.  And my question, no…not a question anymore but a quest. My quest is to help ensure that there is still this particular voice being heard in the world.

Another way of saying that is: God’s not going anywhere.  But will we be the ones telling the story?  And if we want to be, how will we change to make it happen?