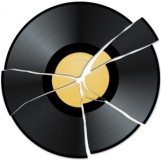 I hear those phrases a lot when people start talking about church.

It’s like a broken record.  Everyone’s agenda is either blamed as the cause or heralded as the cure for whatever is wrong with “church.”

I’d like to hit the needle on that record player for a second.

It’s not that I think organized religion doesn’t have issues.

Man, does it have issues.

And in many ways it needs to follow the path of Jesus and die a bit so something new can be raised up.

But I think that many times the reasons we give for churches and communities having “trouble” (however you define that word) are pretty lame.  I think we’re pretty good parents, but pretty lousy doctors, when it comes to church dysfunction: we know something is wrong but can’t diagnose it.

But I think I’ve identified some things that might be food for thought.  There are others, of course.  Other responses, other questions, other diagnoses.

The following are my top five; you probably have your own.  Feel free to share them.

So, here are 5 of my responses to 5 of the reasons I hear most often when it comes to “the trouble with church.”

# 5: “The trouble with church is that we don’t have a ‘contemporary’ service.”

Hey, have whatever style of church service you want.  We have a couple different worship styles where I serve.

But if I were to guess, I’d say that the trouble with your church is not that you don’t have a “contemporary service” (whatever that means).  The trouble is that people aren’t connecting with the service that you do have.

The relevance of religion can’t be assumed in this day and age.  I think the common person walking around today downloads apps on their phone for two main reasons.

That’s why I download the apps I do (and my wife hates the “flashlight” app…mostly because I use it to find the bed late at night if she’s gone to sleep before me).

So why do you do services at all?  Why do you need them?  Why are they interesting/insightful for you?

Do people even know why you’re doing what you’re doing?  Do they see the deep connections that are present?

People talk about “relevance” when it comes to church all the time, but I think they want to do it abstractly and with the wild assumption that everyone thinks “church” is necessary.

Are you talking about these things?

I really don’t think that Christians today can fail to have the conversation on why the worshiping community is important, but so many churches aren’t having that conversation at all.

Not even amongst the people that do show up at church.

Change the style all you want.  Unless the deeper conversation is happening, I don’t think it’ll go anywhere.  And then you’ll just have someone come up to you and say, “You know what the trouble with this church is? We don’t have a “traditional” service…”

#4: “The trouble with this church is that we don’t have any young people.”

Yeah, this is a problem in some ways, just like a church with only young people is also a problem.

If your church doesn’t see a growing group of disciples, my guess is that the group that is there is unclear about what it’s doing there in the first place.  A church that understands itself (much like a person who understands themselves) works best because it knows where it is going.

Where is your church going?  Have you discussed it?

Many times I’ve heard people lament the absence of “young people,” and I think to myself, “So, you’ve already identified what you don’t have…but what do you have?  Where are you going?  Yes, you’ve talked about what you were, but who are you now?”

Know thyself and you will grow thyself.

Or, if not, if you come to understand yourself as a community best served in joining others in service through disbanding and moving your energies that way, then do so.  If people aren’t coming into your community, go out and join theirs!

#3: “The trouble with church is that this pastor doesn’t work enough.”

But I find that most pastors that are accused of being lazy are actually just burned out.

And they burn out because we’ve stopped hiring pastors to help us be church, and just expect them to do church for us.

Perhaps the trouble is that the pastor doesn’t feel supported.  I have colleagues who don’t even feel liked!  They are simply another reminder to the congregation that they are not who they once were in the roaring 50’s when the beloved pastor reigned over an era of pew-packing popularity, mostly due to the fact that American culture and the church had aligned themselves in an unholy union that we’ve only just recently been able to divorce ourselves from.

It’s unpopular to say out loud, but I feel much of the exodus of this generation from the pews of their parents can be traced back to those boom days when this hemisphere thought that Jesus was waving an American flag…

If you think your pastor is lazy, ask yourself if you’ve taken them out for coffee to chat about what’s going on in their life.  If you do, I’d bet that you’d find a calendar so packed that they’re demoralized before they rise out of bed in the morning because there is absolutely no way they can turn the ship around by themselves with so many issues to attend to…and that they’ve been trying to for far too long.

#2: “The trouble with church is that I could use my time better doing something different on a Sunday morning.”

I hear this one most often from people who aren’t in a faith community.  I can understand their point.

Sunday morning seems, by and large, to still be a time of relative inactivity in this hemisphere.

Youth soccer and dance is starting to invade into the Sunday morning schedule, though…and they’re just the first in what, I imagine, will be non-stop programming.

I think this is a cultural problem, by and large, although there are some steps that churches can take to change this.

In polling the people of my church community on why they attend, what feeds them, a large percentage mentioned the peace and quiet that Sunday morning hour offers them.

Which means that they’re sleeping through the sermon…

But, I find myself seeking the same thing: an escape from the over scheduled, hectic pace.

That, in and of itself, has a positive psychological impact.

But if we find that Sunday morning is the only time that we have to ourselves, I don’t think church is the trouble.

To borrow an old cliche: are we living to work or working to live?  Are we taking time to examine our lives, or just gasping for breath between sprints?

I think there is a deep spiritual problem with a life that is so over-crowded that intentional community feels like another thing on the “to-do” list.

When done well, I think, intentional community gathered around the things of the Divine can be the generator that helps us tackle our to-do lists.

#1: “The trouble with church is that it just brainwashes you.  God isn’t real, anyway.”

Again, I usually hear this from people outside of a faith community.

Although, I do have to say that there are plenty of brainwashed people within the church who behave as if God isn’t real…

I think a typical reaction to a statement like this is one of defense.  I’ve heard many people, who truly care about another person who has this opinion, go into a litany of “proofs for God”, eventually collapsing in a fit of tears.

Because proofs for God are dead-ends, and nothing brings a person to tears with such intensity as the realization that your worldview isn’t shared by everyone…and that they may have some pretty good reasons for thinking the way they do, too.

Churches have a history of being, and many still are, places where brainwashing happens.  But so are movie theaters, concert arenas, political conventions, book clubs…the list is extensive.  Group think can happen anywhere if two or three are gathered, I guess.

Because of this, I think that this reason deserves some careful consideration by those Christians whose knee-jerk reaction would be to challenge it out of hand.

We don’t want to be places of brainwashing, do we?

I hope and think the point of an intentionally community gathered around God would be to ask better questions: about life, existence, how scripture informs our days and weeks, about justice and the path of the Christ.

And I think that intentional communities like a church can be places that de-program cultural brainwashing when it challenges you not to live for greed, but to give of yourself for the life of others.  Or when it challenges a community to not seek glory, but rather stand with the oppressed.  I think our culture tries to brainwash us all the time with mixed signals that only confuse us: buy this, reject that; eat here, follow this diet plan; give money here, divest there.

In fact, I think that our culture tries to convince us that God is real, and that God is us.

But there is another way to live.  A way around shared experience, intentional Divine connection.  A way of song, prayer, meal.  A way where the reality of God isn’t always assumed, but arrived at through communal interaction where we find God most present.

The Church has a lot of trouble; that can’t be denied.  But I’m not sure it has to do with service style, age demographics, pastor efficiency, timing, or group think.

Those excuses play like a broken record.  I think that any church who listens to those excuses will never be able to move the needle and get on their way with mission.

I think most of the time the trouble with church starts with the individual who finds the problem.

And I know I need a community with an eye toward the sacred to help me dig that out.

3 thoughts on ““The Broken Record,” or “The Trouble with Church…””